In Stock! Ready for Dispatch 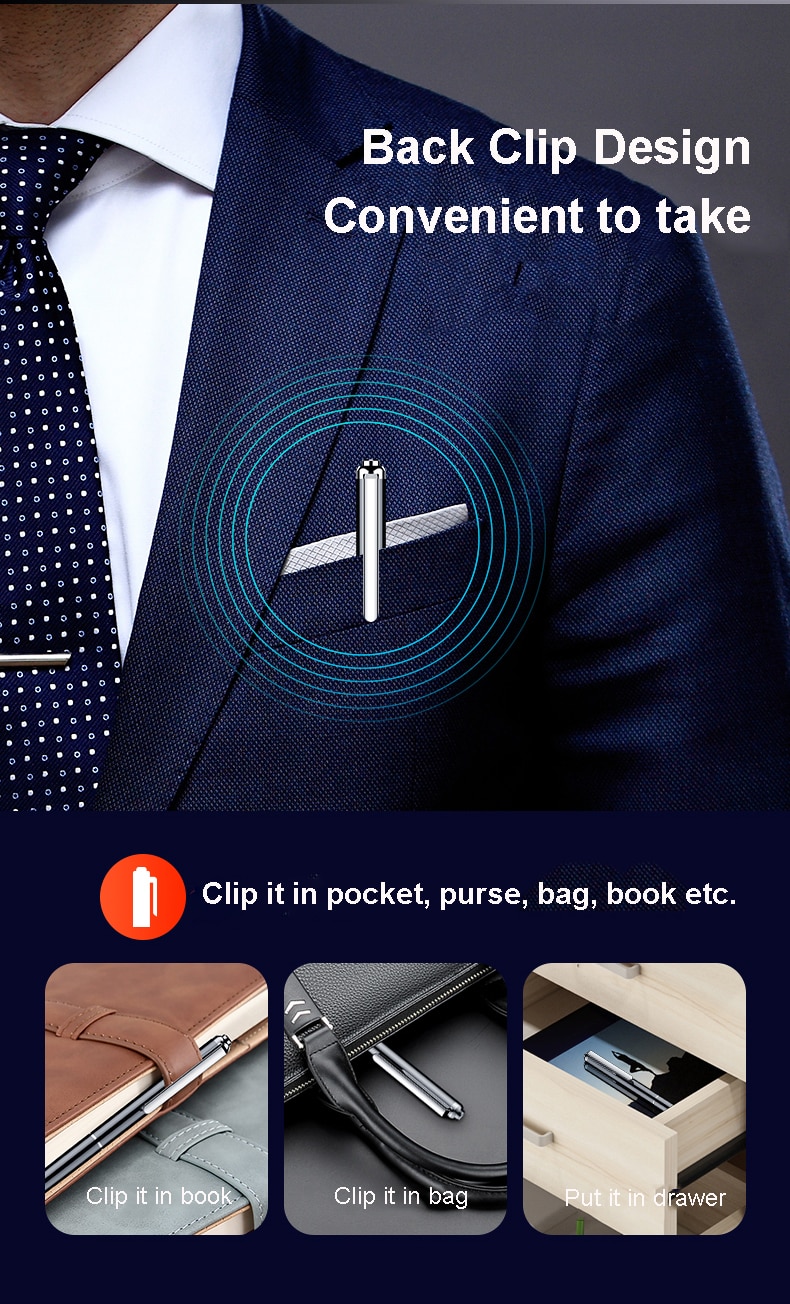 So you need to record your conversations, and you don’t want a big, bulky recorder getting in the way, right? You could use a regular tape recorder or your cell phone, but there are a lot of problems with doing that. Either one of those could randomly make a noise or randomly shut down, and it’s not covert at all.

That’s exactly why you need the Voice Activated Recorder Pen. It’s completely hidden, it works like an actual pen, and will completely disappear into the surroundings. You’ll also have no problem using it, because it has a single switch to start/stop your recordings.

Put the pen in your pocket or just leave it out in plain sight. It doesn’t matter, because nobody will give it a second look since it’s so natural to have pens laying around. You’ll capture conversations taking place as far as 45 feet away from the pen, which a regular audio recorder or smartphone can’t do. The sound quality is superb – you’ll hear everything clearly. 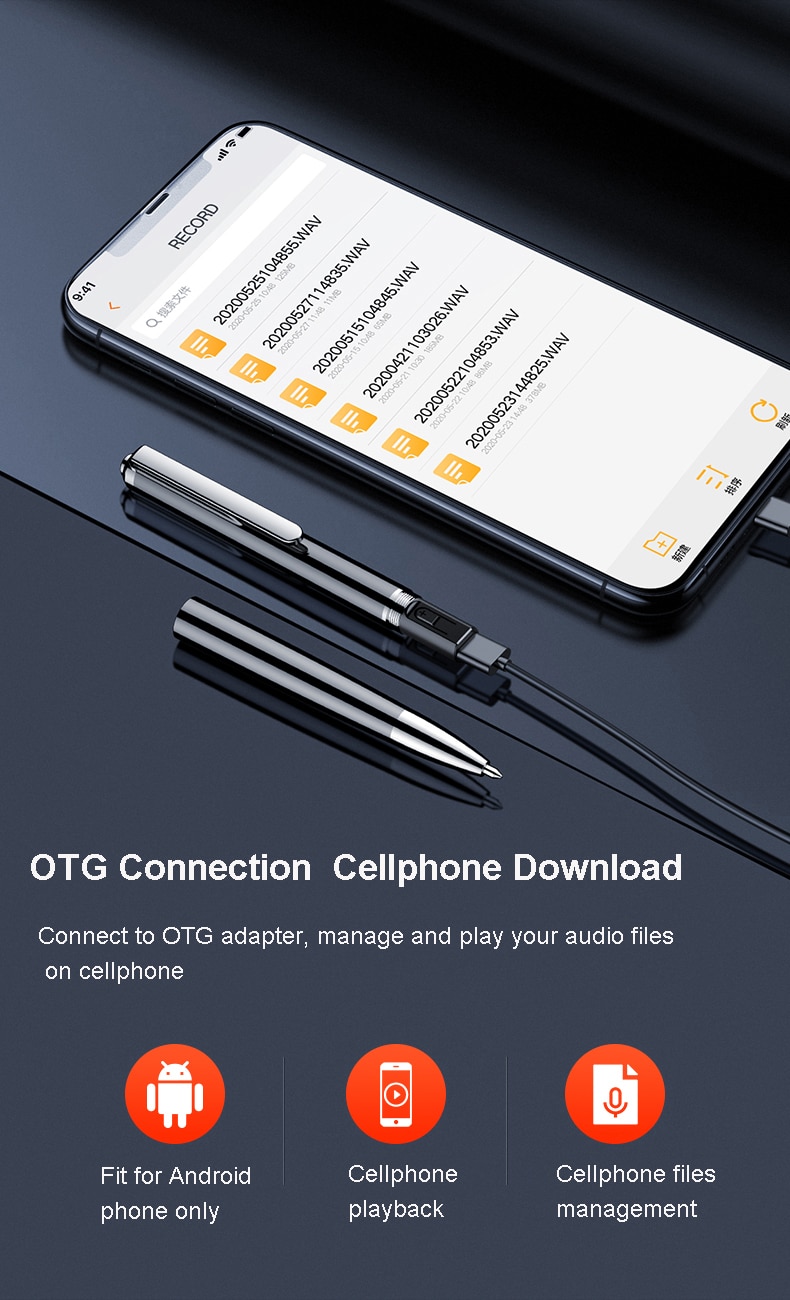 The best part of this pen is the voice activated recording. If there’s no sound near the pen, it goes into a sleep mode. It’ll only tapes when it hears sound, which saves you a ton of time from having to skip over tons of silence to find the conversation you want. It’s also helpful because you don’t have to worry about turning it on right before talking – just leave it on all the time.

The 16-hour battery is recharged when you plug your pen into a computer. You also save power with the voice-activation feature, which means it’ll last longer before needing to recharge.

When connected to your computer with the included cable, you can also listen to your new audio recordings. Do whatever you want with the sound files – send them to someone, or just save it to your computer. 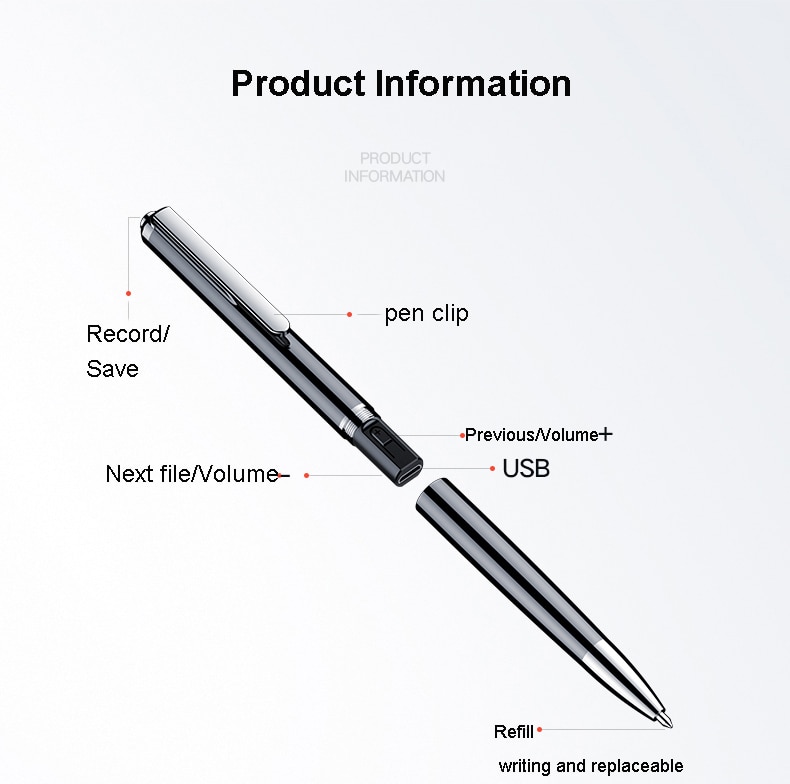 This is a great product. Easy to use. Easy to learn how to operate.
It was a gift for the holiday- and I charged it up and gave it a test run. By following the instructions I was able to get it running in no time.

The audio is pretty darn clear - I honestly expected much worse.
Battery indicator is indicated by a series of lights (25%, 50%, 75% or 100%).
All in all - handy and useful if you need a discrete recorder.
Also - unlike similar tech products- the instructions are clear and direct. That's refreshing.

I needed something to capture detail of lecture for a small classroom. I am forgetful or don't understand content so I like to go over those segments of class and this item does the job. I have a recorder on the phone, but every time I get a text or call it pauses lecture and does not restart when i hang up so I needed an alternate solution. It is discreet so I don't need to feel embarrassed about carrying a recorder around.

I do wish that this had the following: wireless capability; ability to forward/rewind to specific areas of recording; bigger +/- buttons (they are too tiny for my fingers).

Nice recorder, easy to use and small so can be carried in a pocket. The voice quality is good even if you're in the back of the room. It's nice that it has the MP3 player as well. This voice recorder is tiny and elegant. Overall, I'm very satisfied with this recorder and would certainly recommend it.

I got this for my college classes. I am able to record the lesson and listen back to jot down any notes that I may have missed during class. Super simple to use, click to start recording and click again to stop. It can't get any easier than that right. My favorite feature of this pen is that I can instantly listen to what I recorded right after, undo the pen, and plug in earphones and I can listen. It's very handy if you need to study for an exam and I can just listen to the lesson again.

I bought this to record sexual harassment I was receiving at work from one particular guy. I reported it, but nothing was done because he's a fantastic liar and was able to convince the higher-ups that I just didn't like him and was trying to get him in trouble. If I weren't me, I would believed him too, because in public he is smooth and charming. It's only when he corners me alone that he says vile things. This pen recorded the evidence I needed, and now he's being disciplined and isn't allowed to come near me. I think he should be fired, but I'll take what I can get. My only issue with the pen is that I had to cover the light under the clip so I wouldn't be caught out.